Macarons! As finicky as they are beautiful (and tasty). I’ve been determined to tackle these fussy sandwich cookies (pastries? delicacies?) ever since I tasted my first one at a bakery in Omaha, Nebraska of all places. I’ve made batch after batch and have finally (almost) mastered them, so I’m here to share my knowledge. Buckle in, because it’s a very particular recipe, but would it even be true French pâtisserie without some technical skills required? 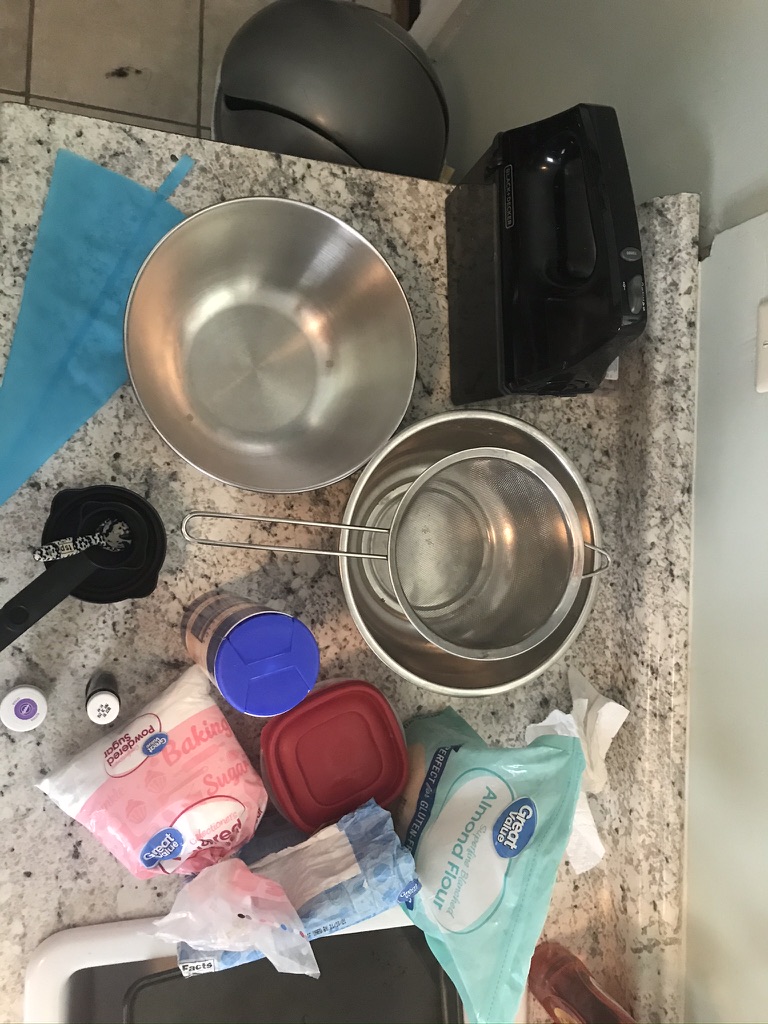 Next, I wanna chat about prep work and supplies. Now, mostly these things are unnecessary, but they do help make your macarons more fool-proof. Taking the time to do them will take your macarons from tasty-but-kinda-ugly to Instagram-worthy.

First, leave your egg whites out for at least 30 minutes, but ideally 24-48 hours. This might sound strange but “aging” your egg whites this way makes them whip up better for the meringue. 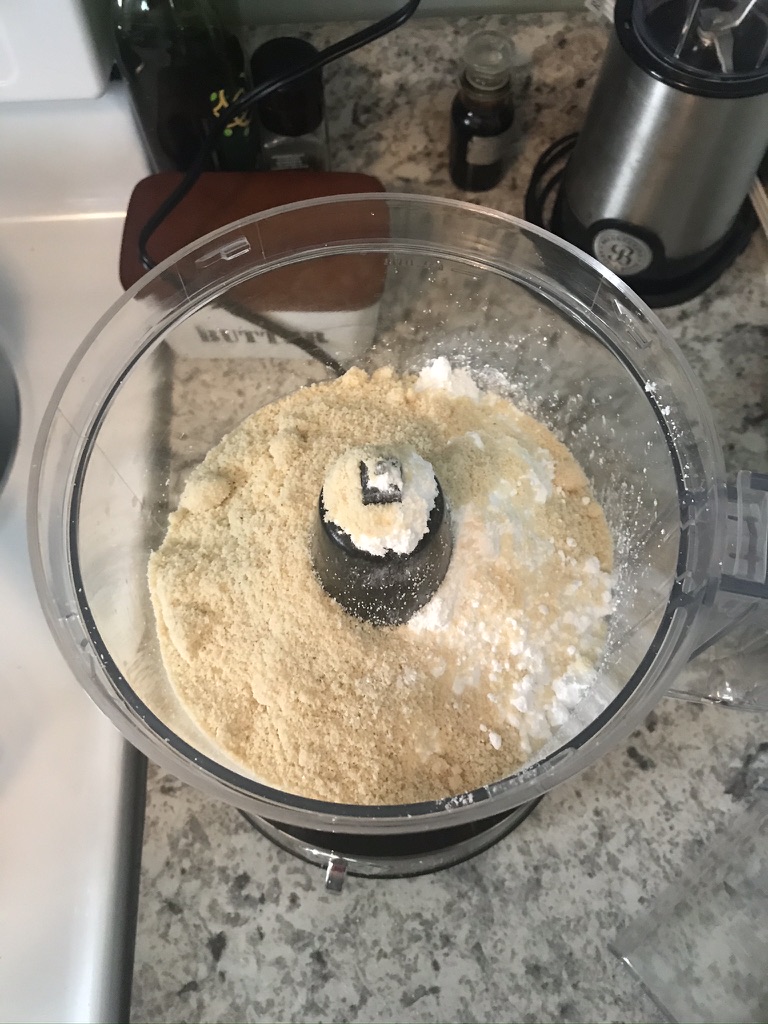 Food process your powdered sugar and almond flour. Now, I had not done this step until recently, when I noticed that my sugar was a little clumpy; both it and my almond flour have lived in my pantry for a while, so I figured some extra zhuzhing couldn’t hurt. Blending both in the food processor helps to break down any clumps and ensures that your flour is as fine as possible. Even if you buy superfine almond flour, blending it helps a lot. The smoother your dry ingredients, the smoother your macaron shells. 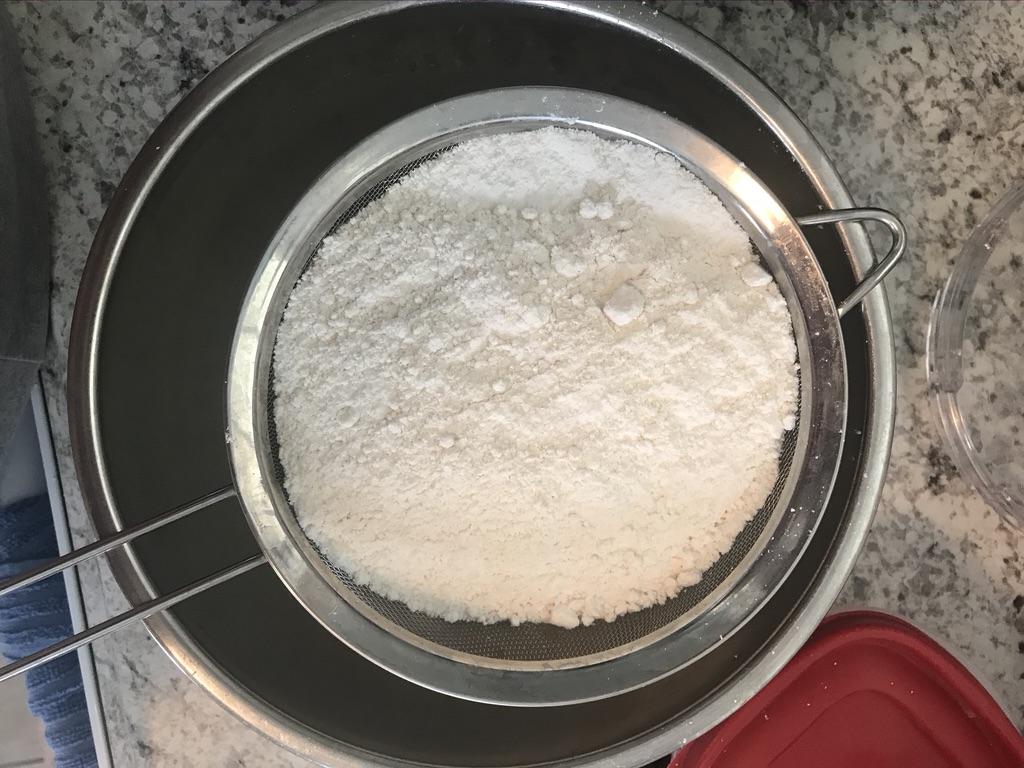 Third, and this is a must if you skip the food processor step, sift your dry ingredients together. Again, you want your flour and powdered sugar as fine and smooth as possible, and sifting it through a strainer or sieve helps to catch any remaining lumps.

Gel food coloring isn’t required, but it works *much* better than liquid coloring. Not only is it more vibrant, meaning you need less to have the same color impact, it also won’t mess with the consistency of your meringue as much as liquid food coloring will. It also holds its color better during baking.

Lots of recipes will call for using a silicone baking mat for macarons. However, I’ve found that the silicone doesn’t dry out the macaron as well as the parchment paper does, so I prefer it. It means your macarons don’t need to bake as long and will stick less often.

Lastly, make sure you’ve got time to let the macarons sit before and after baking. These puppies demand your time as well as your patience. Set aside an afternoon or weekend day to really hone your macarons. 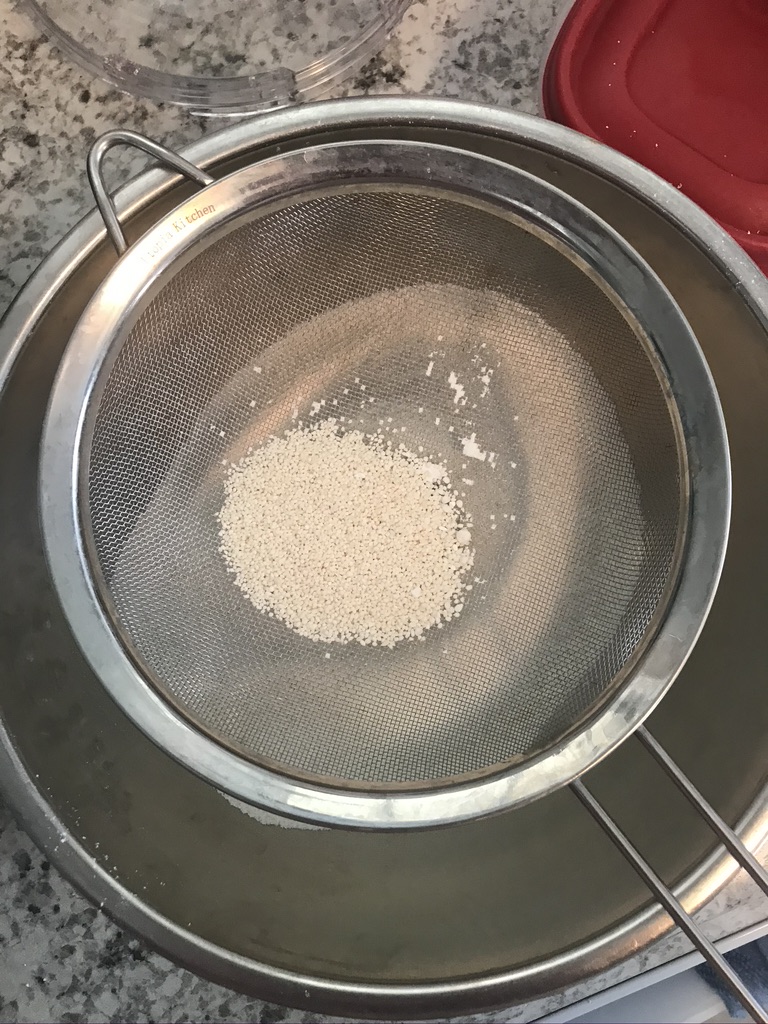 Okay, now that I’ve scared you off even wanting to make these, let’s begin! First, combine the almond flour and powdered sugar in a food processor and pulse several times. Then, sift over a large bowl. Discard any large clumps. Set bowl aside. 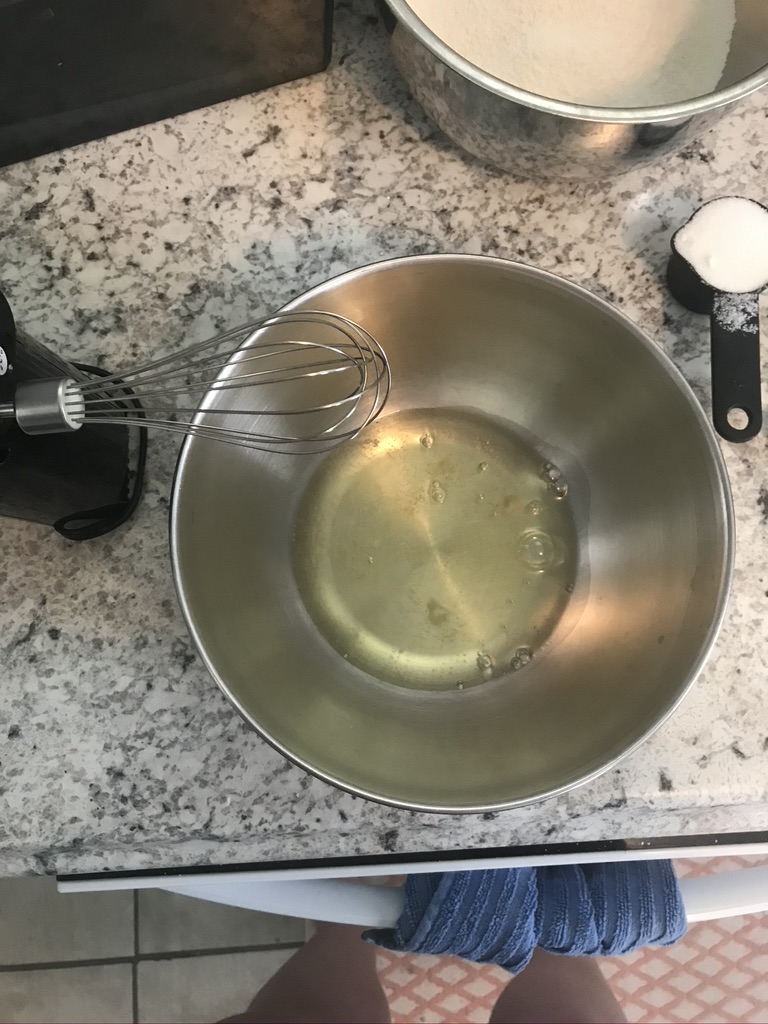 Add your room temp. egg whites to a bowl with a pinch of salt and start mixing with the whisk attachment. Whisk until the egg whites get frothy and opaque.

Once your egg whites are frothy, begin to gradually add the granulated sugar. 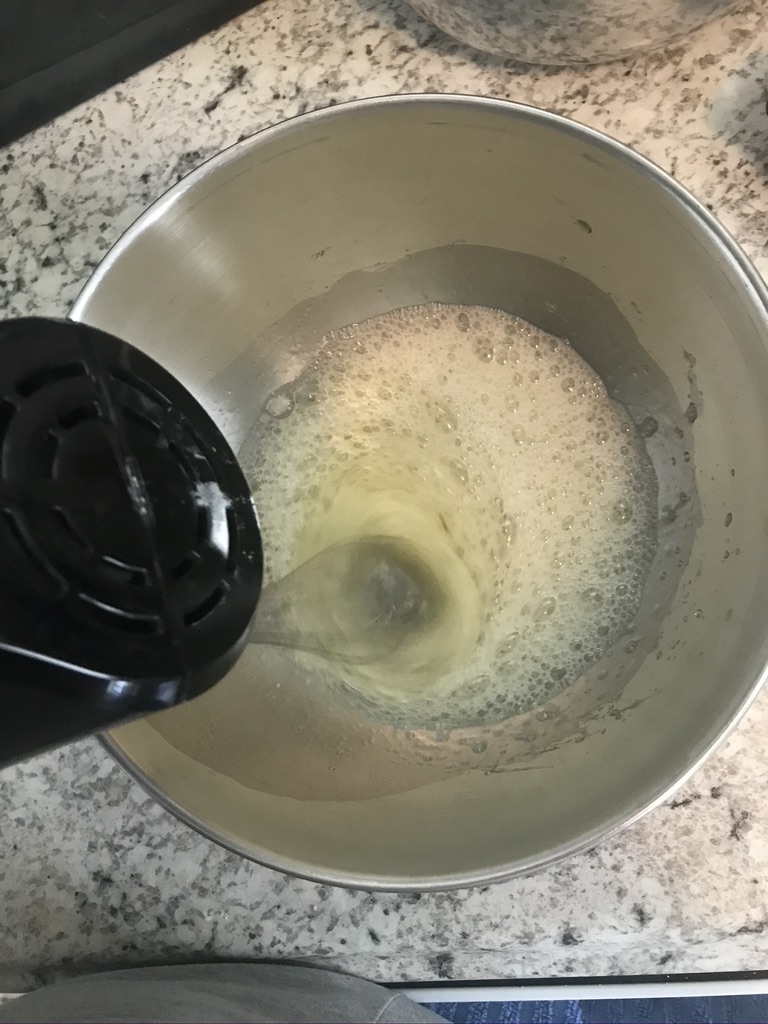 Continue to whisk until stiff peaks form. This usually takes a few minutes, so be patient. Do not under-whip your meringue! If you pull the whisk out of the mixture and a peak forms but falls at the tip, you need to whisk a bit more. 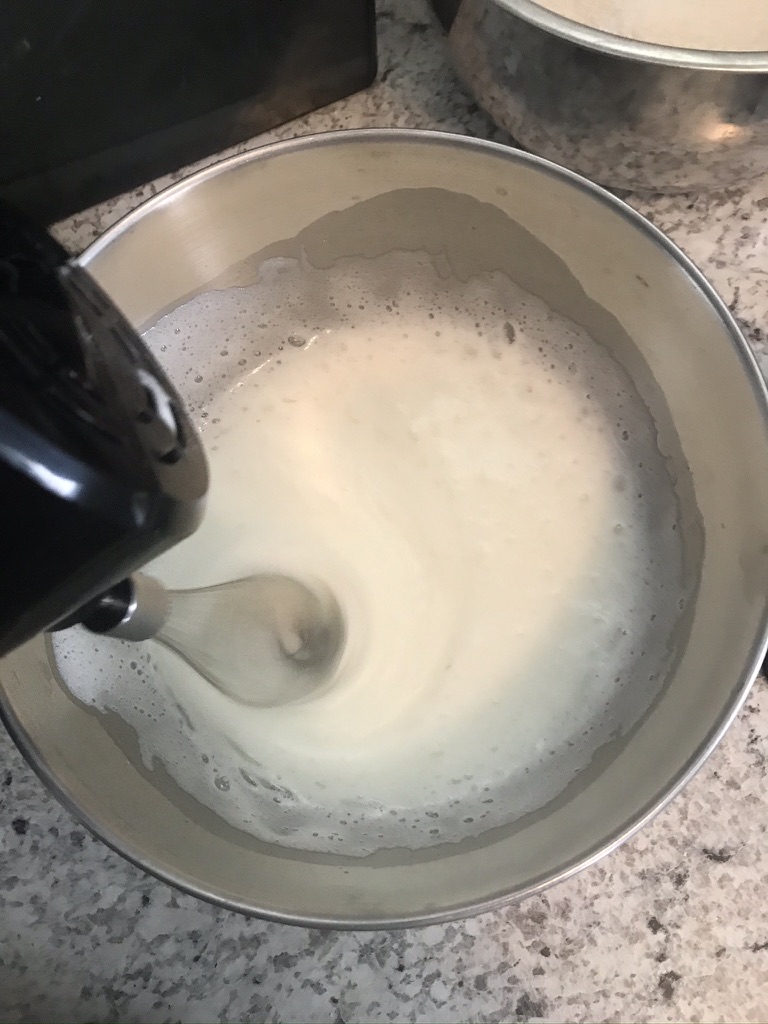 You want your meringue to be stiff enough that the peak holds its shape. It should be so firm that you could hold the bowl upside down over your head and nothing would fall out. 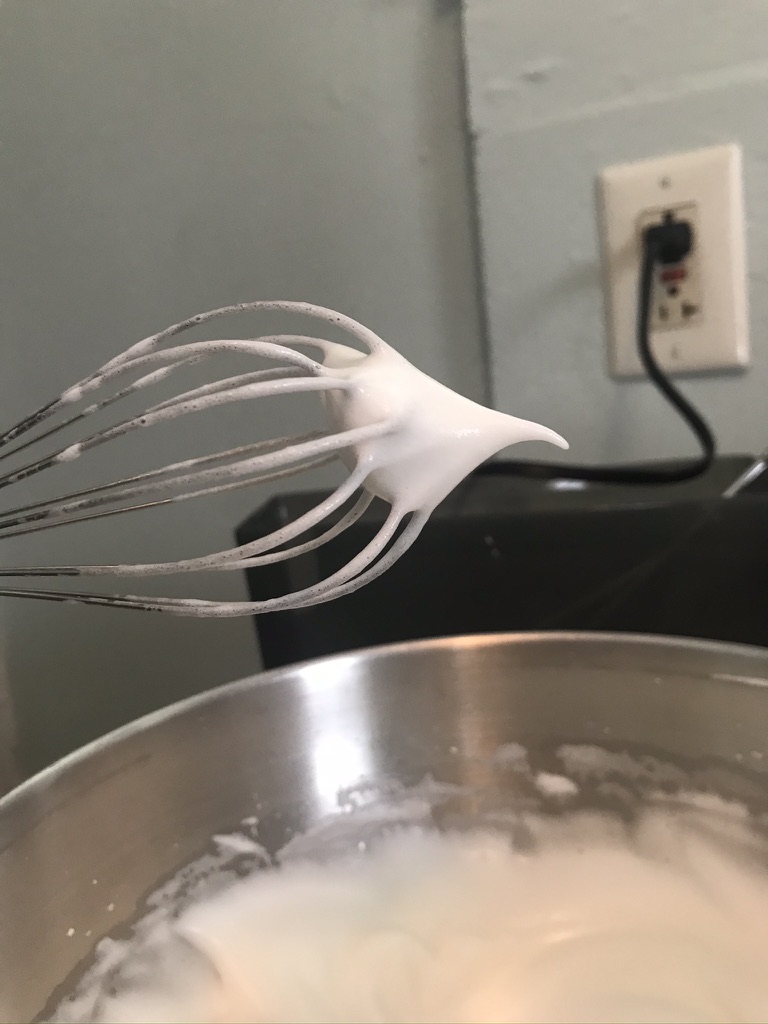 Once you have stiff peaks, add your vanilla and food coloring. Mix until just combined. 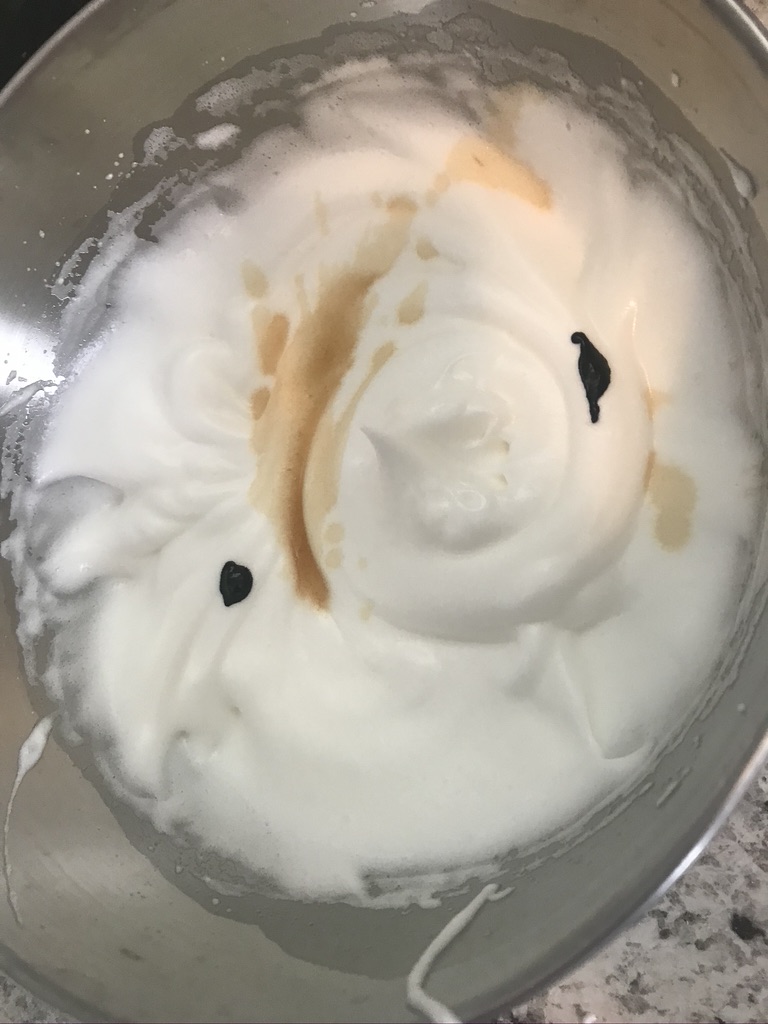 Next, gradually fold in your almond flour and powdered sugar mixture. I usually do about a third at a time, being sure to fully incorporate before adding more.

When you’ve added all of the dry ingredients, fold until the mixture resembles brownie batter. The way to test if your mixture is ready is to try to make a figure 8 with the batter as it falls from your spatula. If you can make an 8 without the mixture breaking, it’s ready. 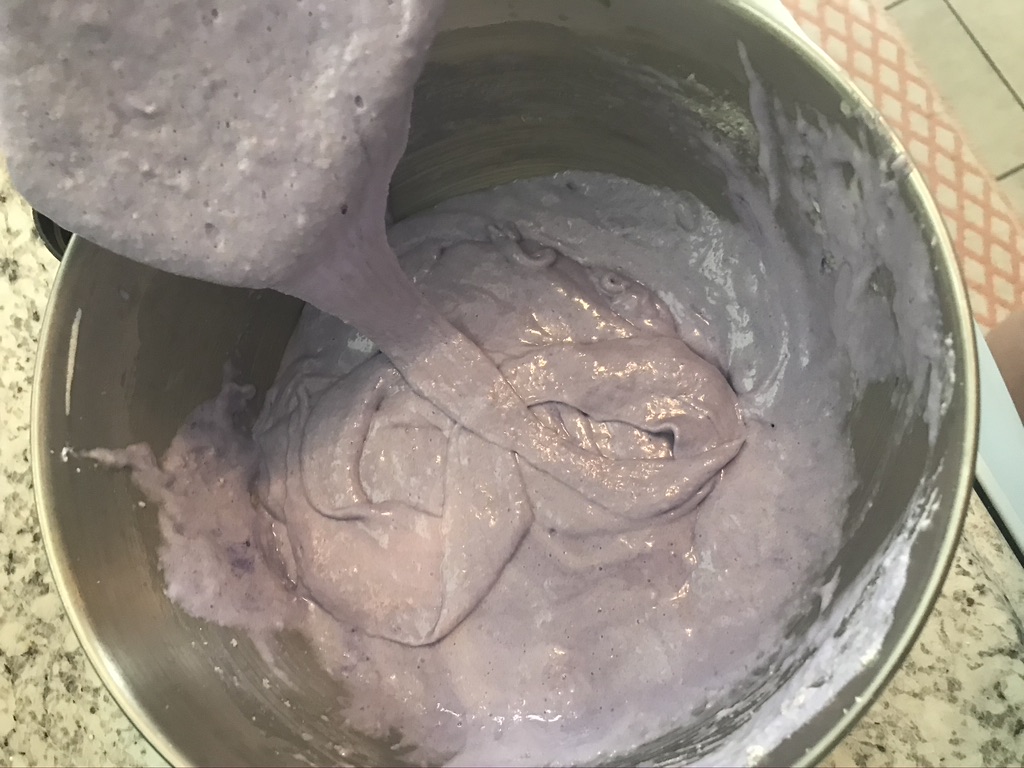 Then, carefully spoon the mixture into a piping bag fitted with a round tip. I fit the piping bag into a pint glass and fold it over the sides so that the glass acts as a holder for the bag, making it easier to fill. Before piping, line a couple of baking sheets with parchment paper. 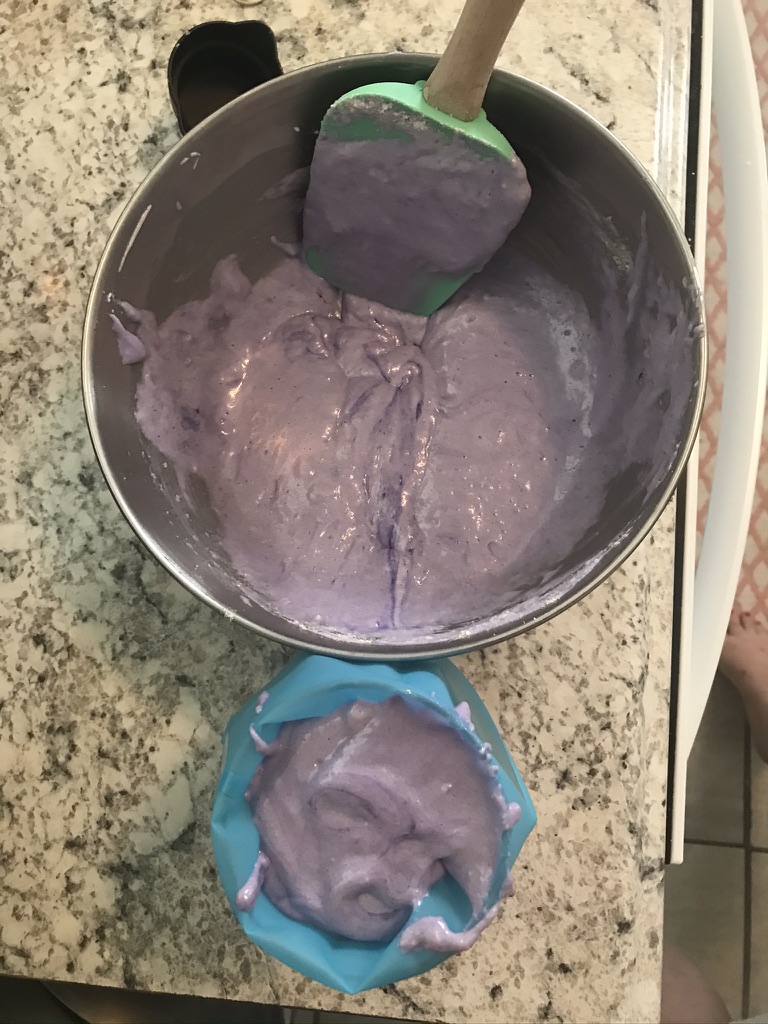 Working quickly but carefully, pipe your mixture into 1”-1.5” rounds. My mixture was a little bit slack this time around (not a huuuge deal but it did make my piping messier), so my sizing is a bit off. Aim to pipe uniformly, but don’t stress too much. It takes lots of practice to get it perfect!

Once you have your mixture piped out, tap your baking sheets against the counter several times to knock out any air bubbles.

Then, and this is SUPER important, leave your macarons for 30 minutes to an hour. This down time is essential to macarons and their iconic shape: letting them rest allows the macaron shell to develop a slight crust. When baking, this crust causes them to hold their shape as they rise, which creates the characteristic “feet” (or pieds, if you ask the French). You’ll know the crust has formed when you can gently run your finger across the top without disturbing the macaron. How long this takes depends on the temperature, airflow, and humidity of your kitchen. It takes a full hour in my kitchen, but wouldn’t take as long in more arid areas. When the crust has formed, they’re ready to bake!

Bake your macarons at 300 degrees for 15-17 minutes. The macarons should not be brown and, if fully baked, should easily lift from the baking sheet. If they are brown, they could be overbaked or your oven might be too hot. If they don’t lift easily from the parchment paper, they’re underbaked and need another minute or two. 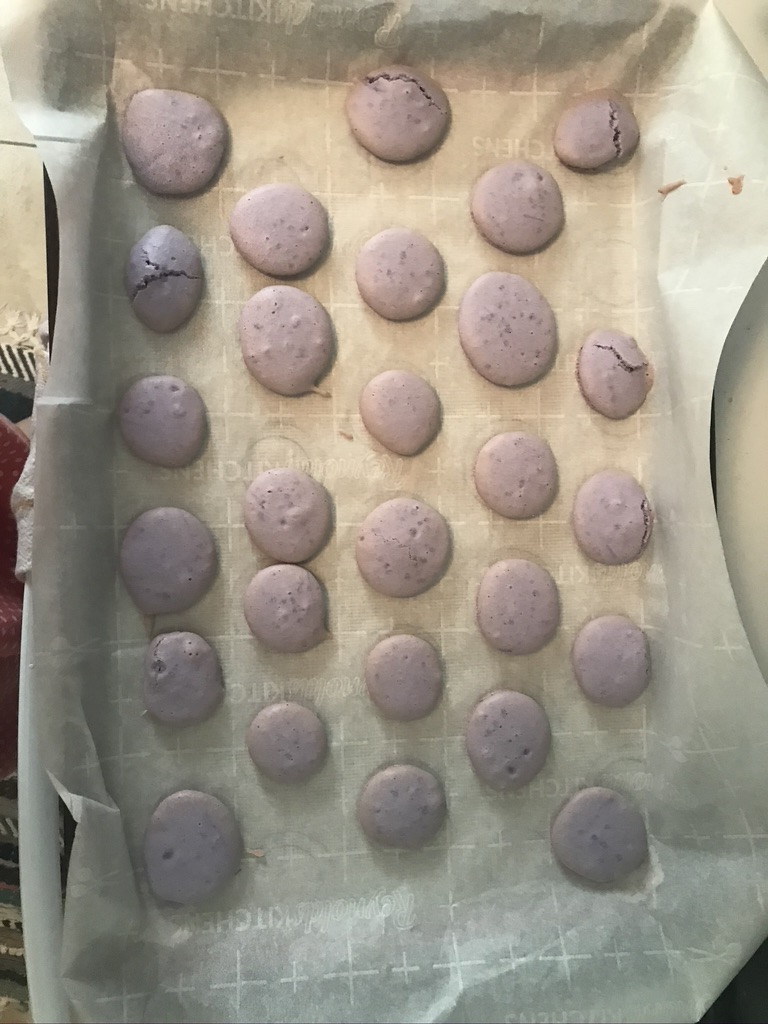 You’ll see that a couple of mine are cracked—that’s because my baking tray is a bit warped and bends in the oven. You can avoid this by having a not-crappy baking sheet 😀

This ripply part at the bottom of the macaron shell is the “foot” we talked about earlier. Remove your macarons to a cooling rack and allow them to cool completely before filling them.

What you choose to fill your macaron is up to you! Traditionally, a flavored buttercream frosting is used, but you can use jam, chocolate ganache, cream cheese frosting, or even curd. Just be sure that whatever you use is firm enough to withstand being sandwiched between cookies and can be eaten without squeezing out the sides too much.

For this recipe, we’re going to use the blackberry lemon curd you might remember from a previous post. But, since that curd is pretty loose, we’re going to bolster it with a buttercream frosting.

To make buttercream frosting, cream ¼ cup of butter with 1 cup powdered sugar, ½ teaspoon of vanilla (or another flavor), and about a tablespoon of milk or heavy cream. This was plenty for my purposes in this recipe, but if you want to completely fill your macarons with buttercream, you should double these amounts. You can also add food coloring if you’d like to make the frosting festive. I added a bit of purple to mine to coordinate with the shells. Once combined, spoon the buttercream into a piping bag fitted with a round tip.

Before piping the buttercream, match similarly-sized shells with each other. This makes it easier to keep track of how many halves need to be piped and makes matching them up once they’re filled a lot easier. I like to flip one of the halves upside down to make for even easier piping. 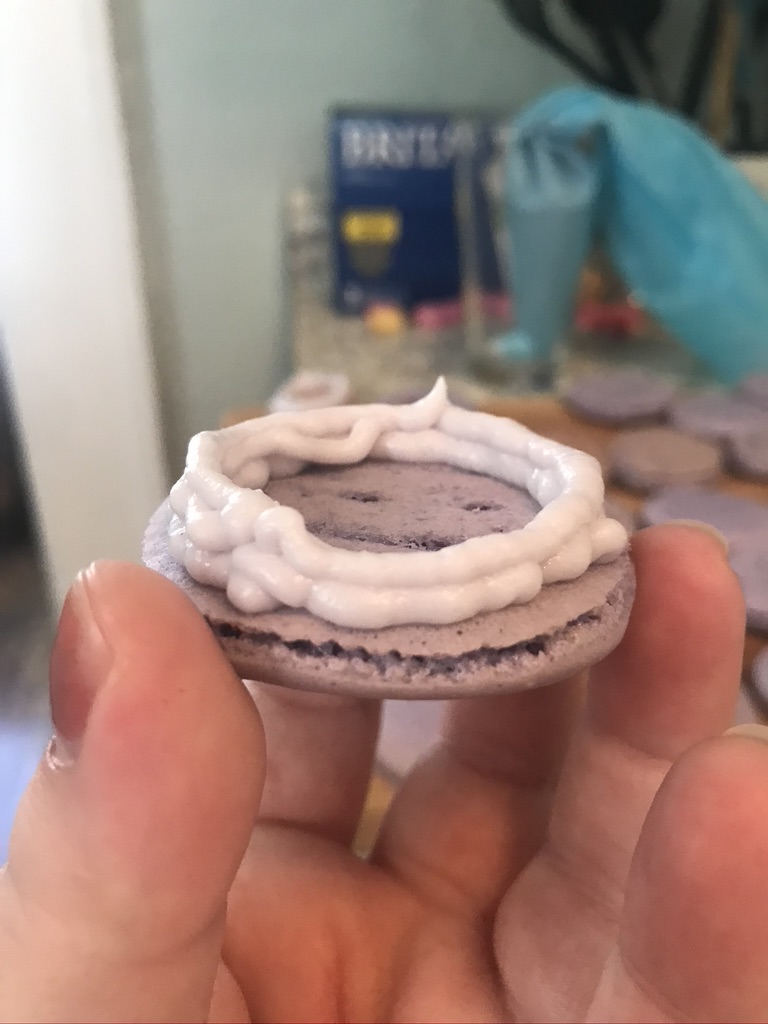 Since we’re filling these guys with curd, which is too soft to retain its shape on its own, I’m piping the buttercream around the edge to create a kind of retaining wall. I was using a pretty small piping tip since it’s all I had clean, so I ended up going over my walls again to give them some more height.

Once you’ve piped your buttercream walls, gently spoon your curd into the middle, being careful not to overfill (like I did with a couple on the right). Then, match the top shells to their bottoms and gently press them together to create a little sandwich cookie. 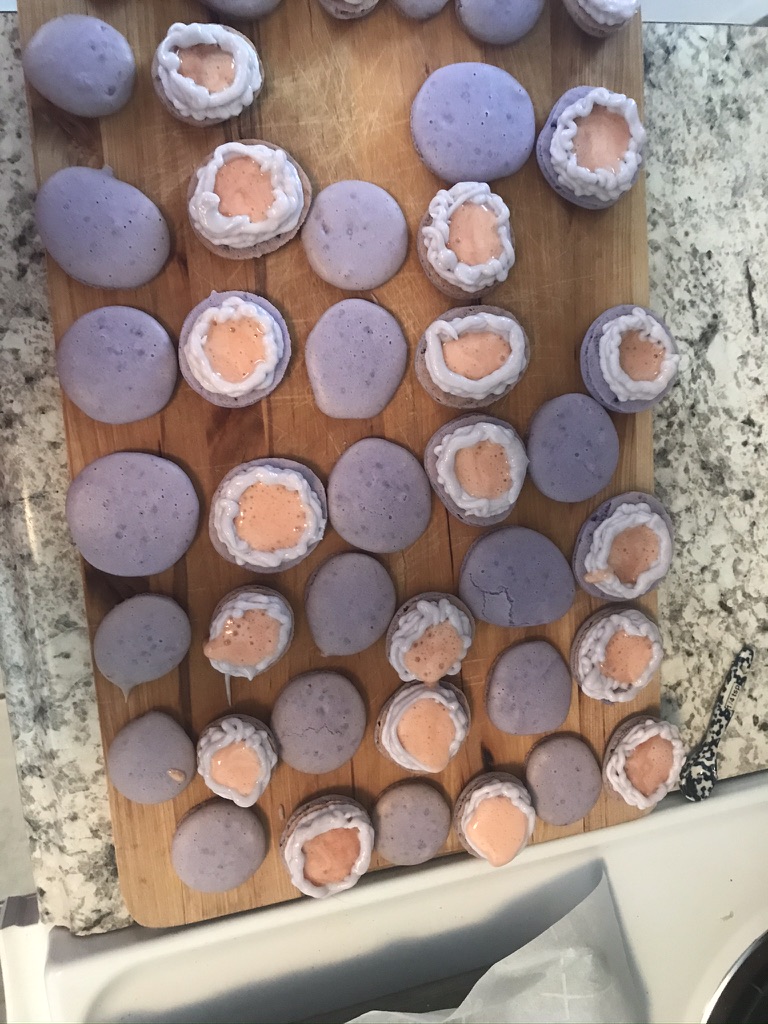 Cute!! Now, and this might just be the most difficult part of macaron making, put them in containers and refrigerate them 24 hours before enjoying. Cruel, I know. But the flavors intensify overnight and the filling softens the cookie shells ever-so-slightly and they truly become perfect. Remember those cracked shells I mentioned? Those are the ones I eat first when I inevitably just can’t resist.

And there you have it, my friends. A beautiful, if challenging, blackberry lemon macaron. 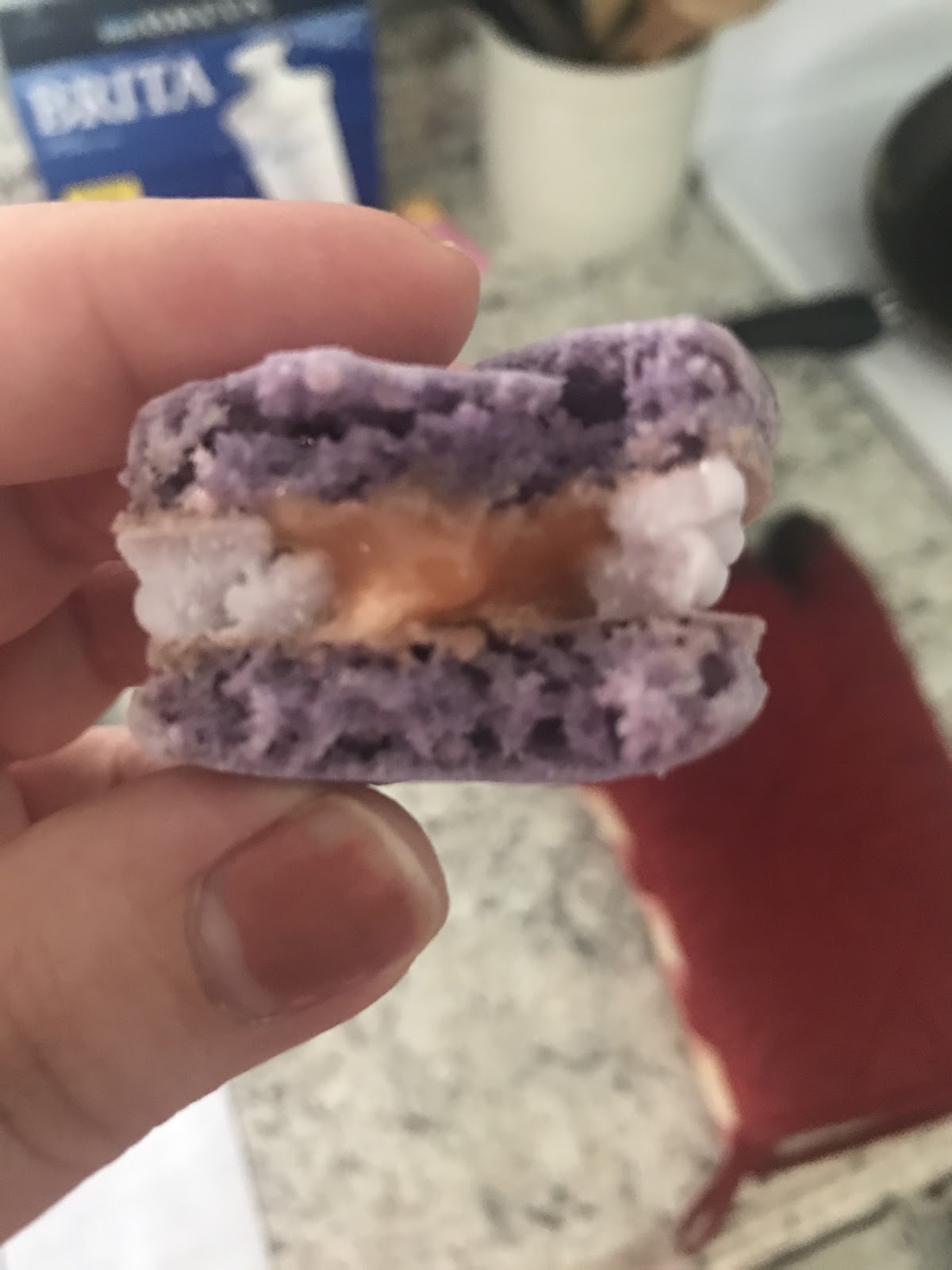 Brynn Martin is a Kansas native living in Knoxville, where she received her MFA in poetry from the University of Tennessee. She is an Associate Editor for Sundress Publications and co-host of the podcast Shitty First Drafts. Her poetry has appeared in or is forthcoming from Contrary Magazine, Rogue Agent, FIVE:2:ONE, and Crab Orchard Review.